Advantages of a Phoenix Fulfillment Center

Need to reach customers in the Southwest and West Coast? Consider a Phoenix fulfillment center.

Dozens of major retailers and brands have done the math and elected to locate major distribution centers in the Phoenix area, including Walmart, Home Depot, Target, The Gap, Amazon, Chewy, Dick’s Sporting Goods, and PetSmart.

Smaller businesses can expand to Phoenix without the need to build by partnering with one of several logistics companies in the area, including Amware Logistics, which offers Phoenix fulfillment center services for direct selling companies and e-tailers. Phoenix is an efficient distribution hub to reach your West region customers. The accompanying map indicates parcel transit times from Amware’s Phoenix warehouse.

A cost-effective alternative to Southern California 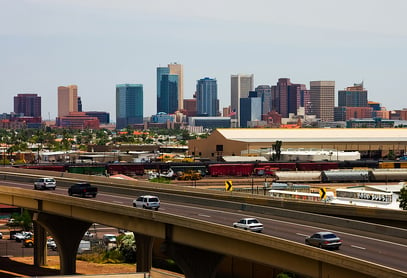 The Port of Los Angeles and Port of Long Beach in Southern California have experienced record volumes and unprecedented delays in recent years. As a result, retailers and e-tailers that rely on these ports to bring in critical inventory from Asia have now occupied virtually every usable warehouse facility from Los Angeles through the Inland Empire (the metropolitan area that borders Los Angeles county to the east). Furthermore, with warehouse vacancy holding steady below 1%, many towns in the Inland Empire have recently suspended new warehousing projects due to environmental concerns.

Fortunately, there are alternatives to an LA warehouse that still provide reliable access to the West Coast’s busiest ports and the population of Southern California. Online sellers can realize significant savings compared to an LA warehouse by using a Phoenix fulfillment center, thanks to benefits such as:

Phoenix By The Numbers

If you’re still not sold on the Greater Phoenix region as an alternative to California, consider the following numbers:

With statistics like these, there’s no doubt that a Phoenix fulfillment center will set up your business for growth.

People flock to Phoenix for the sun and the warmth (It’s a dry heat!). But what’s really driving businesses to locate fulfillment operations in Phoenix are the bottom-line business advantages.  Here are a few, according to the Greater Phoenix Economic Council:

Do we have your attention yet?

To learn more about the advantages of a Phoenix fulfillment center, visit Amware Fulfillment or email sales@amwarelogistics.com.