When Order Fulfillment Automation Does, and Doesn’t, Make Sense

If you’re looking for interesting soundbites about automation, look no further than Elon Musk and Austin Powers’ Dr. Evil.

The second soundbite: The fictitious Dr. Evil famously insisted that the best way to attack a major challenge was to “place [it] in an easily escapable situation involving an overly elaborate and exotic [plan].”

Although one quote is serious and the other comedic, both point to a common mistake many eTailers make – assuming eCommerce fulfillment automation and complexity are always the optimal choice. In reality, it’s better to carefully examine where and when such investments truly make sense.

Here at Amware, we know the best option will vary from one company and one stage of growth to another.  In this article, we’ll address several questions that can help you decipher the answer that’s right for you . . .

Do your current sales patterns reflect a real trend or are they a flash in the pan?

When orders spike due to COVID-19, a special promotion or a black swan event, it’s easy to assume it’s time to invest in new or improved equipment that will help you handle bigger volumes going forward. The challenge is to be sure the success and growth you’re experiencing are likely to be sustained. If so, the order fulfillment automation you’re considering may make sense. If not, it could be a case of too much, too soon.

How much of a challenge are you experiencing in finding – and keeping – good people?

Finding and keep quality labor in the fulfillment warehouse is a challenge. In contrast, there’s anything BUT a warehouse automation shortage. If your fulfillment center is located in a tight labor market or has experienced significant employee turnover, it may make sense to automate at least some of your manual activities. This could be the key to helping you handle order surges more reliably, especially if your temp agency staffing solutions are not reliable. One of the best aspects of machines doing the work is that they rarely call in sick, get injured, or ask for vacation during the peak shipping season.

Will it take longer than three years to see a payback?  (Caveat emptor)

No piece of equipment, no matter how advanced, should be considered a permanent improvement. In this day and age, staying ahead of the game means remaining agile and open to innovation. In fact, we usually recommend that eTailers view order fulfillment automation purchases as three-year solutions, because that’s how long it generally takes for processes and technologies to advance so significantly that another change will probably make sense. Keep that shelf life in mind as you calculate your ROI. If an upgrade can’t pay for itself within that timeframe, it could eventually become an operational albatross rather than an enhancement.

Will we see a payback in a year or less? (Carpe diem)

Although this question may seem nearly identical to the one above, it’s actually a very different animal – because while some order fulfillment automation investments merit a proceed-with-caution approach due to their potentially glacial ROI, others deserve a “let’s go for it” for the opposite reason. 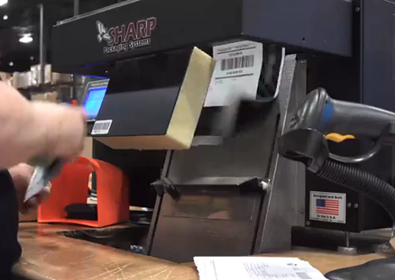 Too often, businesses are reluctant to make even small automation purchases because of the initial expense – even though all signs suggest they’ll start seeing improvements and savings almost instantaneously. While it’s certainly smart not to automate for automation’s sake, it’s also important not to be penny wise and dollar foolish. If an investment in automation can be recouped in a matter of months, hitting the “buy button” makes sense.  One good example might be bagging and automatic labeling technology like the one pictured here. Such an investment can result in an immediate two-to-threefold productivity improvement and very rapid ROI.

Who’s recommending that we automate, and what do they stand to gain?

There are myriad ways to evaluate the pros or cons of automating a fulfillment function or facility, including internal brainstorming or seeking the advice of a 3PL that specializes in B2C fulfillment. But some are considerably more objective than others.  For example, if you’re conferring with an engineering firm or a consultant that’s vendor-neutral, chances are good that the advice you’re receiving is reliable and analytical. By contrast, if you’re conferring with a provider of warehouse automation solutions, it’s in your best interest to seek additional opinions. You may wind up arriving at the same conclusion, but you’ll have greater peace of mind about it because you exercised due diligence.

Have you considered all the costs?

When it comes to order fulfillment automation, don’t make the mistake of using the cost of the equipment as your basis for an ROI calculation. Instead, factor in all the costs, including installation, integrating equipment with your existing WMS or other systems, and training. And don’t forget to account for maintenance and repair costs, because both will eventually be necessary.

Have you weighed all of the possible benefits?

Most companies pursue order fulfillment automation in order to increase their picking speed or capacity. But that doesn’t mean that there aren’t several other potential advantages that also deserve to be included in your final analysis.

For example, don’t underestimate the huge role that warehouse automation can play in improving order accuracy and customer satisfaction.  After all, it takes a lot of time and money to rework an improperly filled order. There’s also the cost of eCommerce returns – and quite possibly, lost business – if that inaccurate order actually reaches your customer.

So, don’t dismiss an automated solution as not worth it simply because it won’t deliver big results in one key area. There may be bigger-picture advantages that contribute to an attractive fulfillment ROI.

Are you trying to automate too much, too soon?

While it’s true that some forms of order fulfillment automation can cost millions of dollars, the operative word is “some.”

There are also many kinds of automation that can help you take your fulfillment and productivity to the next level without requiring a major cash outlay. And it often makes good business sense to explore those options first.

In fact, here at Amware we strongly advocate a modular approach to automating your fulfillment. While your business is gaining traction, that may mean a predominantly manual approach supported by a Warehouse Management System (WMS). As order volumes increase, it may make sense to incorporate low-level automation solutions like box erectors, auto tape machines, or poly-bagging with print-on-bag technology. Finally, as your business matures and requires high-volume, high-velocity picking and shipping, a move to automated/smart conveyors and highly advanced options like voice picking makes sense.

A modular approach allows you to deploy systems and automation when (and only when) your volume dictates. As a result, you can funnel available cash to where it’s most needed and avoid getting tied into inflexible processes or investments that may not be a good fit for your business as it grows and changes.  (For more about this scalable emphasis and why it’s important, check out our eBook Can Your Fulfillment Operations Scale?)

Much like Elon Musk and Tesla discovered, the best answer to manufacturing challenges was a combination of process automation and manual labor. Your decision to deploy warehouse automation doesn’t have be the Big Bang approach; it can be done gradually. Nor does it have to have to be done in-house. Fulfillment specialists like Amware already have tools and technologies in use at multi-client warehouses, including many you might not have considered.   Contact us today to arrange a discussion.