Fulfillment from a Phoenix Warehouse? The Numbers Just Add Up.

When fulfillment professionals say Phoenix is a hot market, they’re not exaggerating.

Over the years, the city has become one of the country’s most reliable and reasonably priced logistics venues thanks to advantages such as extensive transportation connectivity, easy delivery access, and the low cost of doing business there. 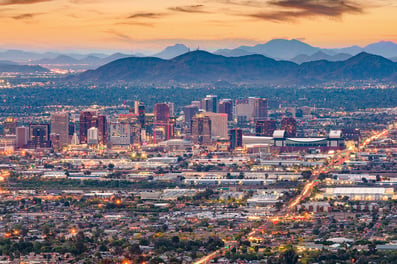 To learn more, check out these impressive Phoenix warehousing, fulfillment and transportation statistics – and feel free to trot them out any time one of your colleagues asks you what’s so grand about Arizona.   Better yet, keep them handy in case you’d like to weigh the pros and cons of using a Phoenix warehouse to support your own business growth sometime in the near future.

Number of consumers that are within a single day’s drive from a Phoenix warehouse.  Among other things, the area features quick access to much of the West Coast (and its ports) as well as consumers throughout the Southwest and Mountain West.

Current population of Greater Phoenix – a key reason why Arizona boasts the third-largest labor pool in the West.

Number of people that UPS already employs across Arizona.  Look for this figure to get substantially higher in the next several months, when the carrier’s eagerly anticipated 970,000-square-foot Super Hub in the Phoenix suburb of Goodyear becomes fully operational.

Number of employees that Amazon currently has at its four Phoenix-area fulfillment hubs.  The company will add 1,500 additional employees in Arizona once it opens a fifth facility in Tucson later this year.

Number of manufacturers that already operate in Arizona.

Number of transportation and logistics companies that are already based in the Greater Phoenix region.  These companies include Amware, which has a Phoenix fulfillment warehouse  in nearby Avondale, AZ.

Future operational acres at Phoenix-Mesa Airport’s SkyBridge Arizona, the country’s first international inland distribution hub to host both U.S. and Mexican customs. When complete, the facility is expected to be a major eCommerce gateway for eTailers selling to Mexico.

Average annual days of sunshine that Phoenix enjoys.  (No wonder the city was ranked in the Top 10 U.S. places for low catastrophic and natural disaster risk.)  This means fewer weather-related distribution delays)

Name of the South Mountain Freeway that is currently under construction in Phoenix. When completed later this year, the Loop will add 22 miles to the city’s roadway system, which is already well-served by three major Interstates and supported by two major railways.

Percent you’d save if you were to build a new 500,000-square-foot warehouse in Phoenix instead of Los Angeles.   A Phoenix warehouse is also approximately 30% to 40% less than it would be in other popular Western U.S. locations such as the Inland Empire and Portland.

Average percent of logistics costs you’d save by using a Phoenix fulfillment warehouse instead of one in California.

Number of SmartPost hubs that FedEx has established in key markets across the country – including Phoenix.   Fed Ex also operates several additional hubs in the Phoenix area.

Dollar amount of inventory taxes that Phoenix charges.  That’s just one of several business-friendly practices, such as right-to-work and minimal regulation that Arizona is famous for.

For more information, we encourage you to download “Manufacturing And Logistics In Phoenix,” visit the Greater Phoenix Economic Council or look at Trammell Crow and CBRE Research.   Better yet, contact Amware Fulfillment. We can give you access to state-of-the-art Phoenix warehouse space while also providing you with a wide range of services designed to improve fulfillment services and reduce parcel costs.