When it comes to cost-effective fulfillment, evidence is mounting that you should plant your distribution center smack dab in the middle of the Garden State.

New Jersey itself is home to nearly 9 million people and approximately 25,000 transportation and distribution establishments. That makes it the country’s most densely populated state, and one of its busiest logistics markets.   Within New Jersey, Middlesex County has emerged as a cost-effective distribution alternative to locations closer to New York City and the Port of NY/NJ. 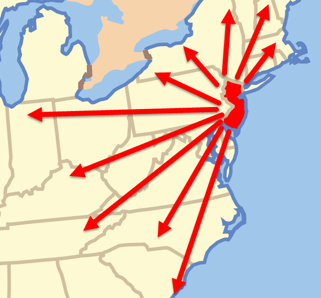 If you are considering distribution centers in New Jersey, here are ten reasons (collected from officials at Middlesex County, “Choose New Jersey” and the New Jersey Transportation Authority) why this could be the right choice.

Rather than lease space directly, many companies choose to outsource fulfillment to a third party logistics company. Amware Logistics, which specializes in direct-to-consumer fulfillment services, operates a large New Jersey distribution center in Cranbury, NJ, not far from Amazon’s DC there.

Should you decide that it makes sense to have a distribution center in New Jersey but don’t have the budget or bandwidth to operate your own facility, Amware can give you access to choice distribution space fast, with none of the capital expense or workforce management headaches.  We offer a wide range of services designed to improve delivery service, control fulfillment costs, and drive down your parcel spend.