Space Program: The Changing Role of the Distribution Warehouse

Fifty years ago this summer, Neil Armstrong etched his way into history when he became the first man to set foot on the moon.

The achievement was epic, but let’s be honest:  He wouldn’t have been able to get off the launching pad, much less to the moon and back, if it weren’t for the mostly anonymous people in Mission Control who did much of the heavy lifting.

Here in the world of fulfillment services, we have our own version of “Houston,” not to mention our own definition of space.

It’s called the Distribution Center – or DC for short. 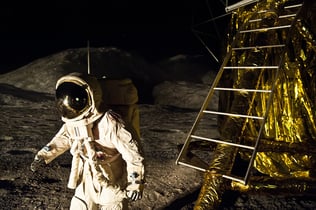 That’s why I’d like to dedicate this week’s blog to what’s going on within the four walls of today’s typical distribution warehouse – because even though most DCs may appear the same on the outside, they’re constantly evolving into something new, different, and increasingly mission-critical on the inside.

It’s hard to believe now, but as recently as 10 or 15 years ago, most distribution warehouses (even those serving retailers) were still predominantly B2B, with shipments arriving, hanging out, and departing in large palletized configurations.

Now it’s all about B2C and small parcel shipments, which is why it’s becoming much more common to see goods traveling to DCs in increasingly smaller, less-than-pallet quantities.

Among other things, this is changing the way that DCs receive, process, and put away their inventory, with fewer forklifts and traditional forms of high-volume storage media required. It’s also making conveyances such as flow racks, cherry pickers, and “man up” equipment much more relevant.

In the past, companies that used third-party warehouses/fulfillment centers were generally okay with sharing DC space as long as their inventory was stored, handled, and picked via completely distinct and separate areas and processes.

But businesses have begun to realize that allowing some of their products to be located, processed, and managed in combination with other companies’ products can do everything from reducing travel time to increasing picking speed, and ultimately create greater efficiency.

With this in mind, look for the distribution warehouse of the near future to look more like a supermarket, where various businesses’ similar products or fast-movers are co-mingled and better coordinated – and less like the dinner plate of kids who insist that none of the foods they eat should be allowed to touch.

Any Way You Want It

None of us enjoys receiving letters that are addressed to “resident” or “occupant.” Likewise, no online consumer enjoys feeling generic – and smart eTailers, direct sellers and subscription businesses have begun to tune into this in a really big way.

From sending out unique product assortments that customers can select themselves to inserting hand-written notes or creating YouTube-worthy unboxing scenarios, many more companies are now offering customized options and experiences for their customers.   Just as important, a greater amount of this customization is taking place in the distribution warehouse.

Along these lines, expect to see more value-added work areas to be popping up near DCs’ outbound trucking doors –and many more non-traditional warehousing activities to become part of a “typical” fulfillment center’s day-to-day workflow.

By now we’ve all probably received at least one ultra-small item we’ve ordered (such as a replacement spark plug) in a massive carton. As more consumers become concerned about sustainability, they’re becoming less tolerant about such wasteful shipping practices; and they’re not afraid to vent about it on social media, complete with pictures and company names.  Also, the advent of dimensional pricing by parcel carriers creates a strong economic impetus to get the box size right.

While it’s possible to address this issue by simply having a greater variety of boxes on hand, some companies are finding that it makes far more sense to employ box erectors instead, because these machines take up considerably less warehousing space while offering far more flexibility.  So don’t be surprised if you see more box erectors and similar machines becoming part of a DC near you.

Labor in the Distribution Warehouse

On a final note, it’s no secret that our industry is going through a massive labor shortage that is impacting how DCs evolve.

The addition of employee-friendly areas and upgrades (such as attractive break rooms or air conditioning) is becoming a much more attractive investment, because when people are deciding which places to work, even little amenities a can make a big difference.

The labor shortage is also accelerating the adoption of warehouse automation and advanced picking techniques like robotics so that companies don’t have to be as reliant on manpower as they once were.

Warehouses will undoubtedly leverage robotics and machinery in a much bigger way over the next five to ten years.

The eCommerce Era Has Landed

To learn more about eFulfillment, download our eBook Fulfillment for Dummies – a crash course for entrepreneurs and business leaders on the pitfalls and opportunities within warehouse fulfillment operations.