Public Goods sells quality household products that are healthy, sustainable and ultra-affordable. Most sales are online at publicgoods.com, but in early 2020 the company began national distribution to a major retail chain.

As if opening up a new sales channel wasn’t enough of a distribution challenge, something else happened in this timeframe – the Coronavirus pandemic shutdown hit hard. Supply lines from Asia were massively delayed, while shelter-in-place protocols led to a 400–500 percent spike in Public Goods online orders – a spike that lasted for months. 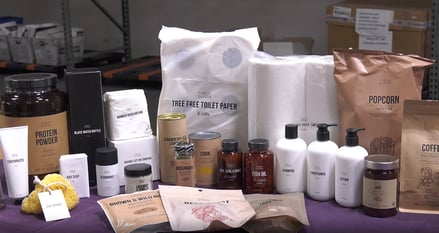 Initially, order backlogs developed across the company’s fulfillment network, which includes Amware Fulfillment’s Phoenix distribution center. These backlogs were a concern for Public Goods and its director of operations, Lloyd Ellman, so the Public Goods and Amware teams collaborated on an action plan to return quickly to Pre-COVID operating metrics, even in the midst of the crisis. That action plan included:

“Within a couple of weeks, we essentially doubled our capacity to process orders within a day after receiving them,” says Ellman. "Many of the giant corporations struggled to adjust to the volume surge and continued to take a week or more to process new orders.”

According to Ellman, there were several factors that led to the success of the stepped-up fulfillment efforts.

Amware’s flexible fulfillment solution enabled Public Goods to address a desperate need among customers for rapid delivery of household essentials – and to grow its business in the process.

“During an international crisis, in two weeks we were able to get back to our normally high metrics for receiving and shipping, while competitors struggled mightily,” says Ellman. “Amware was a key part of our COVID-19 response. They are in the top tier of the many partners we work with in terms of systems, responsiveness and overall professionalism.”