What’s Up With That?  Breaking Down Amazon’s One-Day Shipping News

According to many media outlets, this could be a game-changer for Wal-Mart, Target and other mega-retailers.

But the burning question is what does it mean for smaller or mid-sized eTailers like you?  Is fulfilling orders in one day something you’ll also have to deliver?  And if so, when?

We recently sat down with Amware’s director of transportation, Dan Galassi, to get the low-down.

Walk us through the basics of this Amazon announcement

It wasn’t actually a formal announcement but rather something that CFO Brian Olsavsky mentioned in the middle of an April earnings call with investors.  According to him, the company is “currently working on evolving” Prime from a program that offers members free two-day shipping to a program that offers them free one-day-shipping instead.

Is there a target date for this change? 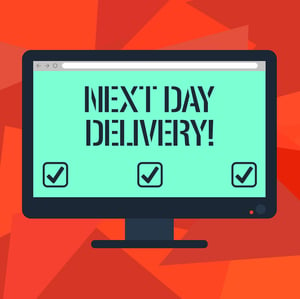 Not one that’s been disclosed to the public.

We know that Amazon is already offering one-day, same-day and even two-hour delivery options in select U.S. markets.  We also know that it’s investing in substantial infrastructure updates to support its one-day shipping goal ($800 million in this quarter alone) and that it expects to build most of the necessary capacity throughout 2019.

But it remains to be seen whether Prime one-day delivery will actually become a reality throughout North America within the next year or whether it will take considerably longer than that.

Others have pointed out that free two-day shipping is no longer the competitive differentiator that it was when Amazon Prime first launched.  After all, a significant percentage of retailers and online sellers now offer it, including many that don’t charge an annual membership fee.

Amazon itself has said that it hopes reducing its shipping time will “open up a lot of potential purchases” and introduce new levels of convenience to customers.

Neither did Amazon – a fact that suggests that it’s pursuing this change for competitive rather than consumer-driven reasons.

So does this imply that one-day shipping isn’t something that consumers are clamoring for right now?

There is no evidence that one-day free delivery will become the de facto standard in the near future.  However, delivery speed is a factor eTailers can’t ignore.

The expectation for speed is growing faster for millennials than non-millennials, though both are on the rise. In 2018, a survey by Dropoff found that 50% of millennials expected faster delivery compared to only 41% in the prior year survey.

OK, so speed is important. But are there factors just as or more important than fast, free delivery?

What consumers seem to value even more than ever-faster, free delivery is CHOICE. While they may be willing to wait for most items, when consumers need something fast, they want to have a next-day or even same-day delivery option – and they’re willing to pay for it.  The Dropoff survey found that 54% of millennials paid extra for faster delivery in the 12 months prior to the survey.

Many industry analysts, journalists and research studies have shown that a short delivery runway isn’t necessarily the immediate must-have that some companies think it is.

Case in point: When Forrester surveyed shoppers, a mere 8% indicated that expedited shipping was important.  Shoppers also said that the top reason they shopped on Amazon was price, not shipping options.

And many large retailers have discovered that reliability, rather than speed, is what their customers value most.  For example, REI’s head of omnichannel was recently quoted in the Wall Street Journal as saying that, “if we can provide four-day or less service for our customers, we’re retaining them and getting wallet share,” while an Estee Lauder exec in the same story mentioned that delivering shipments in one day or less frequently had little influence on buying behavior.

Will Amazon be able to consistently deliver on the one-day shipping promise once it formally launches one-day Prime?

The road to consistent one-day shipping service probably won’t be as smooth or swift as it appears, especially since Amazon will have to rely on external forces – namely UPS, Fed Ex, the USPS and DHL – to pull it off.

Plus, let’s not forget that there’s a big difference between a service promise and actual service delivery.

While two-day Prime has a good track record, it’s certainly not perfect or without its loopholes (including the fact that its guarantee only pertains to the shipping time, not the actually order-to-delivery timeline).  Any problems it has with late, delayed, or inaccurate shipments are only going to be accentuated as its shipping timeline accelerates.

Based on all of these factors, what’s the word on the street?

No one doubts that Amazon will eventually transition to a one-day free shipping standard.  But people wonder if it will be able to do so without compromising some form of customer service quality – or having to eventually raise product prices or increase Prime membership fees.

So what should small- to mid-sized eTailers take away from this?

First of all, remember the lesson of Chicken Little and don’t panic.  Although some headlines may lead people to believe that nationwide one-day free Prime is already here, it will be some time before Amazon is actually able to offer it and even longer before others are pressured to follow suit – if they choose to do so at all.

Second of all, don’t confuse a push of the envelope with a pull from the marketplace.  While consumers definitely appreciate fast delivery, their priority is still getting a good product delivered when it’s promised for a reasonable price – and having the choice for expedited shipping when needed.  That said, it probably is a smart idea for eTailers to establish a two-day delivery capability, because now that one-day delivery is on the horizon, the two-day standard is probably here to stay. That likely means multiple distribution points and a national warehouse fulfillment network.

While it’s important to keep pace with industry trends, following blindly is not the best game plan.  As an eTailer, you should develop a game plan that makes sense for your brand.  For instance, if you sell a unique product that’s in high demand, the pressure to get it there faster is less.  If you sell tube socks, consumers might order from a competitor with a faster delivery option if that competitor offers the same product for the same price.

Amazon has promised to provide additional details on its one-day plans later this quarter, so stay tuned.

We at Amware will continue to monitor the situation, just like we keep up with key developments in the rest of parcel carrier/last-mile community.  We will continue to use our technologies and experience in parcel shipping services to provide the best available suggestions to optimize your parcel spend.