Advantages and Challenges of a Having Fulfillment Center in Los Angeles

While many people love Los Angeles for its movies, logisticians and eTailers have come to love the City of Angels for its eCommerce fulfillment benefits. In this article, we’ll discuss the many advantages of having a fulfillment center in Los Angeles, while exploring some of the associated challenges that you need to be wary of. 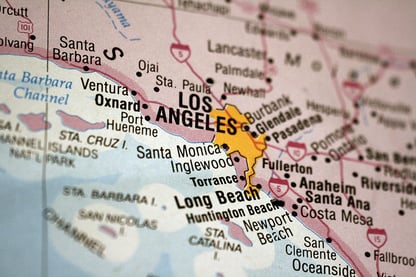 With millions of residents and world-class seaports, Los Angeles is part of the country’s most populous state, not to mention its busiest international logistics gateway for incoming container shipments. Here are 6 fulfillment advantages of calling Los Angeles home for your operations.

A large local customer base

Approximately 13 million people live in the Los Angeles metro area, and another 10 million people live in other parts of nearby Southern California. As a result, it’s easy to provide same- or next-day delivery to a vast number of consumers. Plus, other major markets like Phoenix, San Francisco and Las Vegas are located less than a day’s drive away from any Los Angeles warehouse.

The area’s Ports of Los Angeles and Long Beach are the largest ports in the Western Hemisphere and the busiest in the country. Together, they handle nearly 40% of all ocean containers that arrive in the United States – and enable nearby fulfillment centers to get product into distribution quickly.

Southern California features an impressive 284 sunny days per year – and zero days of snow – which means there’s far less precipitation to slow your shipments down.

Seven major freeways (110, 405, 91, 710 and 105) and interstates (I-5 and I-10) make it easy to get your Los Angeles warehouse’s orders on the road and into customers’ hands quickly. And should your eCommerce orders require expedited shipping, the nearby Los Angeles International Airport, which handles more than 2 million metric tons of air cargo each year, offers many options.

All of the country’s major parcel carriers have a strong presence in Los Angeles, including UPS and Fed Ex, which employ approximately 16,500 people in the area. The area is also well served by a wide variety of regional parcel carriers.

Many notable e-commerce, fulfillment and package delivery companies already have a significant presence in Los Angeles, because they’ve done the math and determined that it makes excellent business sense. These include Dollar Shave Club, GOAT, the Honest Company, and Amware Fulfillment, which has operated in Los Angeles for years.

Like any good movie, however, there are challenges that eTailers will encounter along the way to Los Angeles fulfillment success. The following are some of the most pressing ones.

Warehouse space is nearly tapped out and very expensive

When the COVID pandemic struck, the supercharged rise of eCommerce led to companies requiring more warehouse space. The supply of available space began to plummet, even in the more spacious Inland Empire, and competition for that space is intense.

In the summer of 2022, the vacancy rate for industrial real estate in Los Angeles is 2.1% (the national average is 4.7%). The Inland Empire has only 0.6% of space available.

There is currently over 40 million square feet of industrial space under construction in Southern California, but much of it is already spoken for.

This scarcity for both existing and new warehousing space has caused prices to skyrocket. New leases for industrial space in Los Angeles average over $14 per square foot.

Fortunately, you can avoid these headaches by partnering with a 3PL fulfillment provider that already has an existing warehouse infrastructure in the Los Angeles area, and can provide the space and services your operations require.

California labor laws are different than any other state

California is known as being a very ‘worker-friendly’ state, with labor laws that are considered to be the most liberal in the country.

Examples of laws and regulations unique to California include a higher minimum wage, laws prohibiting ‘unsafe’ warehouse quotas, paid rest breaks, and accommodations that employers must make for outdoor workers when the temperature rises above 80 degrees Fahrenheit

Companies who do not regularly do business in California will have to make significant adjustments on the Human Resources side to comply with California laws and regulations. Or such companies can simply partner with 3PL providers that already have a logistics infrastructure in California and have HR departments that manage compliance with the state’s workforce regulations.

The availability of labor is also a challenge. In the Inland Empire, for instance, the number of workers within the fields of transportation and warehousing grew from 36,500 to 192,100 between February 2020 and October 2021. A big reason for this is the increasing need for workers to perform order fulfillment (a more labor-intensive mode of warehousing compared to retail fulfillment). It's become harder than ever to recruit, hire and retain warehouse workers. Once again, there's an advantage to aligning with a fulfillment 3PL that has a strong, stable workforce in the region.

Turn to a 3PL Provider for Los Angeles Fulfillment

If you’re looking to enjoy the advantages of Los Angeles fulfillment while mitigating the challenges of doing business in this market, your best course of action is to partner with a 3PL that already has a presence in the region. By doing so, you can skip the headaches related to warehousing space and labor, and simply tap into a 3PL’s existing infrastructure.

There are many 3PL providers in the region, and some like Amware Fulfillment specialize in pick and pack services as well as multichannel fulfillment to both consumers and retailers.

So, when your fulfillment operation is ready to “go Hollywood,” be sure to consider partnering with a 3PL that’s already hit the big time.