Mention the term “West Coast fulfillment” and the name Los Angeles won’t be far behind – and understandably so.

Now the country’s second-largest city, it features an outstanding combination of eCommerce advantages, not to mention some close-to-perfect weather.

Want to know more? Check out these impressive stats to see why a Los Angeles warehouse might make excellent sense for your growing business.

A large local customer base 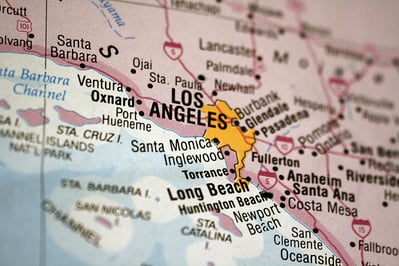 Approximately 10.2 million people live in Los Angeles, and another 10 million people live in other parts of nearby Southern California, according to LA Almanac. As a result, it’s easy to provide same- or next-day delivery to a vast number of consumers. Plus other major markets like Phoenix, San Francisco and Las Vegas are located less than a day’s drive away from any Los Angeles warehouse.

The area’s Ports of Los Angeles and Long Beach are the largest such facilities in the Western Hemisphere and the busiest in the country. Together, they handle nearly 40% of all ocean containers that arrive in the United States – and offer distinct global transportation advantages to any fulfillment center that’s located nearby.

Southern California features an impressive 284 sunny days per year – and zero days of snow – which means there’s far less potential precipitation to slow your shipments down.

Seven major freeways (110, 405, 91, 710 and 105) and interstates (I-5 and I-10) make it easy to get your Los Angeles warehouse’s orders on the road and into customers’ hands quickly. And should your eCommerce orders require expedited shipping, the nearby Los Angeles International Airport, which handles more than 2 million metric tons of air cargo each year , offers numerous options.

A healthy supply of warehouse space

Although much of it is already spoken for by eCommerce businesses like yours, there’s currently more than 1.5 billion square feet of warehouse space in the three booming Southern California markets of Los Angeles County, the Inland Empire and Orange County alone, according to the OC Register. This includes Amware’s Long Beach, CA fulfillment center, which is located just ten miles away from the area’s ports.

All of the country’s major parcel carriers have a strong presence in Los Angeles, including UPS and Fed Ex, which employ approximately 16,500 people in the area. The area is also well served by a wide variety of regional parcel carriers.

Many notable e-commerce, fulfillment and package delivery companies already have a significant presence in Los Angeles, because they’ve done the math and determined that it makes excellent business sense. These include Dollar Shave Club, GOAT, the Honest Company, and Amware Fulfillment, which has operated in Los Angeles for years.

In fact, should you decide that a Los Angeles warehouse is the best bet for you but don’t have the budget or bandwidth to operate your own facility, we hope you’ll consider contacting Amware Fulfillment to help. We offer a wide range of fulfillment services designed to improve your fulfillment speed while reducing everything from your product handling costs to your parcel spend.